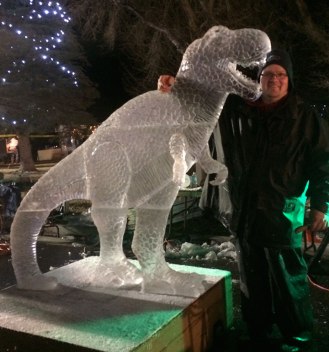 The first day was the People’s Choice. Greg carved his infamous
T-Rex sculpture and was the crowd favorite. This design was 2 blocks carved in 4 hours. Greg pulled out the win, although the weather was horrible for ice sculpting. Carvers were in a race with the sun, working in 55 degree temperatures! 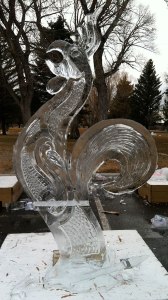 The second day featured the individual competition. Greg carved a rooster. This was also 2 blocks and had a 4 hour time limit. Greg took First place and scored a Gold medal.

This was the final competition of the ice carving season. Check out more of Greg’s competition ice sculptures. 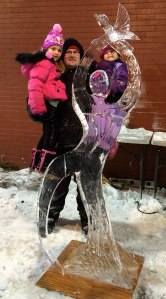 The whole family traveled to Michigan this year to watch Greg Butauski win double golds in both the Individual and Team Ice Sculpting competitions!

The events took place on February 6-7 in St. Joseph, Michigan. The first day Greg sculpted “Peace and Love.” This was a beautiful 1 block sculpture that took First place and scored a Gold medal in the Individual Event.

Second day was the grueling 8 block/8 hour team event. The sculpture, “Everybody Walk Your Dinosaur” was a giant T-Rex being lead on a leash by a little girl. Greg and teammate, Dean Murray, began the day with not so great weather conditions. Temps got up in the 40’s with sun beating down all day on the sculpture. They used UV-resistant tarps to block out the sun.

The final two minutes were nerve-racking to say the least. This photo was taken with the judge standing by counting down the last seconds. Greg and Dean rushed to get the ice leash to freeze to the dinosaur’s collar.

The crowd cheered as they got the leash to freeze to the little girl’s hand and the judge called time! What an exciting end to a long day.

Here is the final sculpture which took First place and scored another Gold in the Team event! Next up is the Crystal Classic Winter Festival in Green River Wyoming. 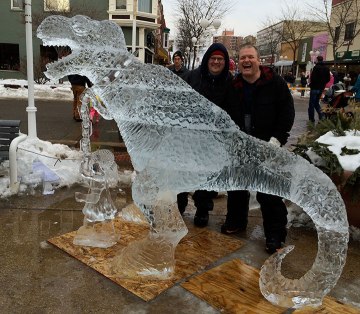 It’s the first competition for the 2015 season and Greg Butauski earns a Gold medal for his sculpture titled, “T-Rex.”

The Village at Leesburg, VA, is a new competition on the NICA circuit. It was a tough one, with 8 blocks to carve in 8 hours! 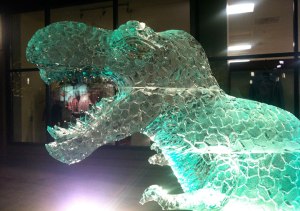 The event took place January 31 and carvers worked in 30 degree temperatures. It took 2 hours and 30 minutes just to stack the T-Rex sculpture and was completed within the exhausting 8 hour time limit.

Next on the circuit will be St. Joseph’s Magical Ice Festival on February 6th and 7th. Keep checking back to see event results, which all leads to the NICA US Nationals Championship on February 20th.

Greg Butauski competed in the U.S. National Championships for Ice Carving in Perrysburg, OH, on February 21 & 22,  and was the overall winner of the two day competition, earning the title of 2014 National Champion!

For 23 years, Greg’s dream was to be the National Champion. He has won the World Championships in Fairbanks, Alaska, and has competed in the Olympics (Vancouver and Salt Lake City). The National Championship completes two of three titles he has been working to accomplish in his life. The final achievement will be an
Olympic Gold.

For this competition, ice carvers had to qualify by placing first, second, or third in a NICA sanctioned event.

The weather played a role in this competition, with temperatures above freezing—always a challenge when sculpting ice. Carvers used tents to block out the sun.

The first day of competition, Greg carved a beautiful ice sculpture titled, “Miracle Grow,” which featured a woman sprouting from a flower. This sculpture used 1 block of ice and took 3 hours to complete. Greg won 1st place and a gold medal in the first of the two day competition!

On the second day, carvers had 4 hours and worked with 2 blocks of ice. Greg’s sculpture for the second day of competition was titled, “Big Bad Wolf,” which is the classic story of the wolf and the three little pigs, but this theme had an “under the sea” twist. He placed 2nd in this second round of competition.

With the two day scores combined, Greg earned the title of 2014 National Champion. Check out the image gallery below to view the initial sketches and final drawings of the two pieces, along with the completed ice sculptures. 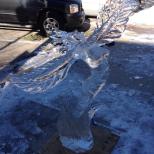 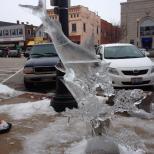 The “Lured In” piece featured a bass about to get caught on a lure. This ice sculpture was carved from 2 blocks and was completed in 4 hours.

Greg will compete in the NICA US Nationals February 21-22, his final competition of the season. Check back with us to see the results!

St. Joseph held their annual Magical Ice Festival on February 7th and 8th in Michigan,  where Rock On Ice’s Greg Butauski and Jeff Petercsak competed in the team competition.

The ice sculpture, “Swordfish Hunter,” scored a gold medal! This sculpture used 8 blocks of ice (more than 1 ton) and took 8 hours to complete. Below are sketches of how it all came together.

Only two more competitions to go – the Green River Crystal Classic in Green River, WY, and the NICA US Nationals in Perrysburg, OH. 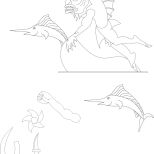 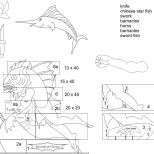 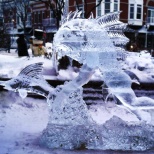 The festival, sanctioned by the National Ice Carving Association, consisted of both professional and amateur competitions.

For the professional competition, Greg carved “The Reptilian”—half man, half lizard warrior—out of 10 blocks of ice. He earned a gold medal with this sculpture. Greg carved a total of 12 hours, over two days, in freezing temperatures!

The next competition Greg will compete in on the winter circuit will be held in St. Joseph, MI. The season wraps up with the big US Nationals competition in Perrysburg, OH. Be sure to check back for the results of all the competitions!

For more ice sculptures, check out Rock On Ice. 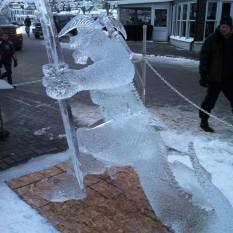 Welcome to the blog for Rock On Ice! Here you will find articles about one of the most unique and artistic professions—Ice Sculpting!!